Ray Leonard Boxing's living legend reveals a life of triumph and tribulations in his new book, The Big Fight.

Your new autobiography, The Big Fight, will shock a lot of people. It covers everything from your failed marriage to alcohol abuse to even your suffering two instances of sexual abuse. Why did you decide to write the book?
It was a fight. A big fight. It was something that bothered me for over thirtysomething years. I felt like now I was in the right place at the right time with the right people to let go of all those demons that I’ve possessed for all these years. What really helped was when I saw Todd Bridges on television [talk about his abuse] with Oprah Winfrey. That had a bearing on my decision-making process to proceed.

Most athletes’ autobiographies are constructed to enhance or protect their legend. Your book deconstructs your legend. Was that a difficult decision for you to make?
I wasn’t thinking about the consequences or repercussions. I wasn’t thinking about anything other than having the courage to reveal something that, especially for a fighter, would be seen as embarrassing or weak.

Did the people close to you know these stories, or were even people close to you discovering this through the book?
No one knew except for my first wife, Juanita, and my current wife, Bernadette. They were really the only two that knew the whole story, including about the sexual abuse. My children didn’t know about it. My close friends were shocked. I never showed any signs of my abuse unless I would have a lot to drink. Then those symptoms of abuse would begin to trickle out.

Now that people have read the book, do they come and share their stories of abuse with you?
It has been amazing. I have had guys dressed in business suits come up to me, embrace me, some shed a tear. I’ve had guys with tattoos, muscular guys—every different type of guy you can think of has embraced me and said the same thing.

Is it true that you never wanted to be a professional boxer?
That’s true. After I won the gold medal, I had no desire to become a professional boxer. I was just going to be like Bruce Jenner and be on the Wheaties box and do commercials. That was my game plan. I only turned pro, because my father was sick. I needed to cover his medical expenses.

Did you enjoy boxing at the time?
I loved amateur boxing—the Golden Gloves, Pan-American Games, the Olympics. I just knew I would never pursue a professional career because I had heard so many stories of guys who turned pro and their lives had been ruined because financially they didn’t have people watching over them.

You were able to control your own career without relying on the major promoters. How were you able to succeed where so many people before you had failed?
I had good honest people, like Mike Trainer, the lawyer who orchestrated my career. They didn’t have ulterior motives. But no one knew that I would reach the level that I did. I never knew that level existed. The whole thing was a fairy tale.

Your first fight against Roberto Duran in Montreal was even bigger than the Olympics. It was also your first loss. What was that experience like for you?
I was just numb. I was in denial. There’s no book that tells you what to do when that type of trauma happens. It’s all trial and error.

The return fight now known as the “No Mas” fight is one of the most famous in history. Does it bother you that it’s remembered more for Duran quitting than for your electrifying performance?It did at first. Now, it’s history to me. It’s good history, the fact that he quit and why he quit, rather than the fact that I made him quit, it used to bother me, but I’ve long gotten over that.

The famous Round 7, with the bolo punch, the Ali Shuffle, and the theatrics, you can hear the crowd noise become deafening with excitement. Did you know you were going to do that?
It was all done spontaneously. You can’t train that way for a fight. My brother, Roger, told me to do things that would piss Duran off. When I saw an opportunity and started sticking my face out at him, at first it was just cute. But when I saw it was making him really mad, I kept going. I was getting to him.

What was your trainer, Angelo Dundee’s response when you came back to the corner?
Oh, Angelo wanted me to play it serious.

But you saw the effect it was having?
Absolutely, that’s why I kept it going and it worked. He quit in the next round.

In The Big Fight you refer to several instances where you were injured during training, but refused to postpone the fights. Why were you so adamant about risking so much?
I think I was stupid. In fact, I know I was stupid. People thought, “Well Sugar Ray could beat these guys at half strength.” I saw Terry Norris the other night. I should have never fought Terry Norris at 154 pounds. I hadn’t been 154 pounds in the 10 years before that fight. That fight, the Camacho fight, I took those fights to get away from things outside the ring—my failed marriage, the sexual abuse. I had all the toys, but I wasn’t happy. No one ever asked, “Ray, how do you feel today?” It’s seems like a small thing, but it isn’t.

Do you miss boxing?
I miss the camaraderie. I miss training for a fight. I miss beating the odds. The competition, the preparation. Watching my body and mind evolve into this machine after 10 weeks of training. I really miss those moments with my guys in training camp. My sparring partners. The evolution of getting better and better.  I love the sport. I respect it. It kept me off the streets. I could have gone the other way. Boxing was that surrogate father. It was that guy that my dad couldn’t be for 24 hours. I ran; I trained; I was disciplined. It’s my love.

Has something replaced that feeling in your life?
My sobriety. My father is 89. My mom is 83. My younger kids see me sober, and say, “Why doesn’t papa drink?” I’m trying to reconnect with my older kids. Ray Jr. is 37 and Jarrel is 27, and I’m trying to find that connection. I know I wasn’t a good father; I was a shitty father. I know I can’t make the past go away, but maybe I can make things better in the future. My wonderful wife, Bernadette, who has been so supportive of all of this, says that the book is really about me apologizing to my first wife, Juanita. The book is really saying “Juanita, I’m sorry I was such a jerk.” I saw Juanita at a book signing. Afterward we had dinner together. We didn’t talk about anything in the book. I just wanted to acknowledge that I wanted to make amends.

Is there one moment in your career that is most special and personal to you?
The most personal one is when I beat Marvin Hagler. Now they say  “the controversial decision against Marvin Hagler.” I hear all this stuff. It doesn’t bother me because I did what I did. I won the fight. I did what most people thought was impossible. I went the distance with Marvin Hagler. To me, it was a personal triumph. To Marvin Hagler, it was a nightmare.

If you could change one thing about boxing, what would it be?
In our sport, we don’t work together. Other sports—the NBA, the NFL—they have problems, but they fix them. They come to a compromise and fix them. Boxing doesn’t. The sport can generate so much money in one night, especially when people work together.

In your era, the big fights happened. Leonard was going to fight Duran. Tommy Hearns was going to fight Hagler. In today’s era, those fights may never have happened.
That’s because a manager or a promoter, their guy is 21-0 or 25-0. They think that means something. It doesn’t anything. It’s ok to have two or three losses. It’s what kind of fighter you are that people respect. I have a few losses on my record, but that doesn’t justify who I am.  Hearns had losses. Hagler had losses. That made us better fighters. After my first fight with Duran, which took me to the brink physically, I came back and fought five months later. These days, that second fight may never happen.

What do you do these days outside of boxing?
I do a lot of motivational speaking. My speech is called POWER, which stands for Prepare, Overcome, Win Every Round. I use boxing as a metaphor, because we’re all fighters. We get knocked down. We need a great corner. Everything I used to be a great fighter can be used in everyday life. It’s been a wonderful experience.

What was your Dancing With the Stars experience like?
I was never more fit in my life. I nearly hyperventilated. I visualize my performance in the ring. I just kept seeing myself tripping my partner or forget the choreography. After I did the first two, I was ready to light the fire, and that’s when I got eliminated. Just when I was catching my stride, it was time to go.

What would you like people to remember you for?
I want to be remembered as someone who wasn’t just a fighter, but was special, and understood what I brought to the table every time I stepped to the ring. I gave my heart, blood, sweat and tears. And also, I want people to remember me for being honest. I told it straight in the book; Tommy Hearns should have won our fight. I also believe I beat Marvin Hagler. It’s all out there. I never thought in a million years that I would open up my life to the world. It was really hard to do, but every day it feels better and better. Not easier, but better. 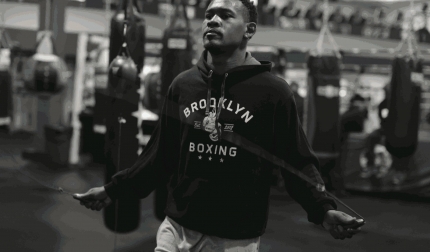 The Miracle Man Danny Jacobs has fought through childhood poverty and a life-threatening bout with cancer. Now he wants to fight his way to the undisputed middleweight championship