The Road to Sparta Ultramarathon legend Dean Karnazes shares what he learned while running the 153-mile path of Greek legend that inspired the world’s most grueling race.

Famed ultramarathoner (and AQ contributing editor) Dean Karnazes is no stranger to monumental running challenges. Ten years ago he ran 50 marathons in fifty states in fifty consecutive days. He’s also run350 miles in under 81 hours, foregoing sleep for 3 days, and completed a 200-mile relay race all by himself. He’s run distance races in some of the world’s harshest environments, including Antarctica and the Sahara Desert. But when he resolved to follow in the footsteps of the ancient Greek all-day runner Pheidippides by competing in the 153-mile Spartathlon in his ancestral homeland, Karnazes faced what was perhaps his greatest challenge of all. 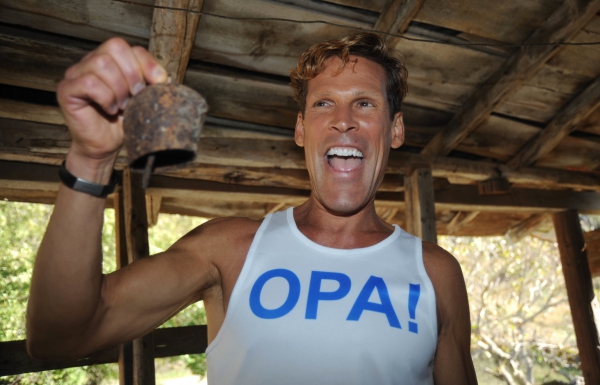 While I remember most of the Spartathlon vividly, I have no recollection of certain segments along this stretch of the course, as though entire chunks of data were wiped from my mind or were never recorded in the first place. Sports psychologists talk about the importance of positive self-talk, but what happens when the voice inside your head goes silent? At some point along the way the noise and chatter had gone quiet within, and I’d slipped into some bizarre deeper state of being. I don’t think I was dead during that episode, though I wasn’t fully alive, either. I was somewhere in between. It wasn’t a markedly unpleasant experience, nor was it a resoundingly pleasant one. It just was. I can only articulate these things after the fact, when I possess the cognitive reasoning to reflect on the occurrence. At the moment in time, my mind seems to be unplugged and there is only a state of quiet nothingness.

Out on the Spartathlon route, the course had steadily climbed to an elevation nearly that of Mount Parthenion’s summit—some 3,200 feet—high above Tegea, though I don’t remember any of it. It’s all gone, removed. We passed through the small townships of Kamari and Manthirea, where the paved road twisted and turned through an evergreen landscape, though I scarcely remember any of that, either. But now, under a blazing sun, as I began the long descent into the Eurotas Valley, flickers of comprehension came bursting through periodically, like bright glimmers of luminosity popping off a crackling sparkler. Dimitris, a member of my crew, reminded me I hadn’t put anything in my mouth in a long time (I heard his voice, at least, but don’t remember seeing him). Cars honked as they drove past, people waving and hollering out the windows, checkpoints appeared and then disappeared. Sometimes I was keenly aware of my surroundings; other times I was not. I’d run 150 miles and was wholly consumed by the desire to will myself across that finish line.

There came a point where I found it almost impossible to put one foot in front of the other, and that’s when everything that mattered most in my life became clear. I was there because I had to be. It was my destiny, my calling. In so many ways these were the most glorious footsteps of my life, yet in other ways they were the most unrelenting grunt work I’d ever undertaken, and a damn tough way to make a living. Like Greece itself, the Spartathlon had been a dichotomous experience.

From a competitive standpoint my performance was well below par. I knew this, and I was disappointed in that regard. But I also knew I must still conduct myself as a disheartened champion would. My personal ethos demanded that I always demonstrate arête (excellence and virtue) and uphold my bestness, no matter how weakened my state. As the legendary ancient Greek athlete Archilochus once expounded, “O heart, my heart, no public leaping when you win; no solitude nor weeping when you fail to prove. Rejoice at simple things and . . . know the tides through which we move.”

Paraphrasing historian Thomas Cahill in Sailing the Wine-Dark Sea, “the tides through which we move . . . ” is a chilling reminder that nothing lasts forever, that life ebbs and flows but eventually all is swept away by the currents of eternity. Let our temperament be humble in both glory and in defeat, let us maintain modesty in times of high achievement and honor in times of heartbreaking failure, and let us never forget that the illusion of permanence can deceive and that all things have their place and time but must inevitably come to an end. If we may conduct our life in accordance with this eternal truism,there is nothing more; we have lived life as best we can. 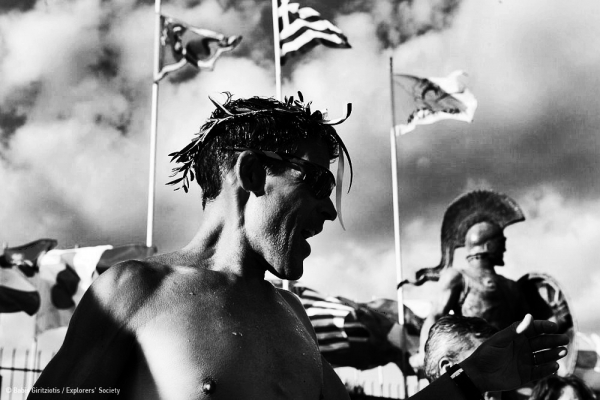 A procession of fans was waiting to escort me from the edge of town. Some drove scooters, some road bicycles, and others ran next to me. All were talking at once, asking me questions and hooting at spectators along the sidelines. Kids darted back and forth, nearly tripping me, screaming and laughing all the while. People cheered and clapped, “Bravo! Bravo Kostas!”

As we rounded the last corner and came running up the final stretch of roadway toward the finish, that cacophony and chaos of banter transformed into a melodious rapture. The pageantry of those last few steps is impossible to describe. I just glided inward as if surfing on clouds. To finish the Spartathlon race, you do something unique within the sporting world. There is no finish line to cross, no mat to step over or tape to break; instead, you conclude the journey by touching the feet of the towering bronze statue of King Leonidas in the center of town. The mayor of Sparta places an olive branch coronet upon the head of each finisher, and you are handed a golden goblet of water from the Holy River of Eurotas, just as Pheidippides had been given. There is no race finish as spectacular as that of the Spartathlon, and there will never be. This is it, the genuine article, the place it all began. Nothing will ever top it. Ever.

Pheidippides would have met with the equivalent of the mayor in his day, only that man would have been the king. Exhausted as he must have been from his long journey, his job was not yet complete. After arriving in Sparta, Pheidippides would then have to present a compelling case for why the Spartans should join the Athenians in battle. He’d have to pull himself together and appear poised and articulate, communicating with clarity and coherence. Herodotus recorded the moment thus:

Men of Sparta, the Athenians beseech you to hasten to their aid, and not allow that state, which is the most ancient in all of Greece, to be enslaved by the barbarians.

Apparently his plea was convincing, for it worked. The Spartan leaders agreed to bring their army to Athens to join forces against the Persians.

I was ushered into the medical tent for a mandatory racer’s assessment. It was stifling inside and reeked like a public urinal. I’ve been through many postrace medical checks before, but never had I witnessed anything quite like this place. The scene was shocking, total carnage. Some runners were slumped over with their heads buried deep between their knees while others lay lifelessly on cots with IVs protruding from their arms. Many had splints or temporary casts on their legs, blood and sputum were splattered everywhere, drip bags hung like grapes on a vine, soft cries and moans echoed throughout, and people coughed and wheezed uncontrollably. Medics wearing surgical gloves darted about frantically trying to attend to all the wounded. One of them stopped and looked at me. “Were you in the race?” he asked. I nodded my head. “My God, you don’t even look tired.”

“Then may I go?” I felt like I was just getting in the way of things.

He excused me, and I stepped out onto the streets of Sparta. There was an assemblage of people waiting for me. They had more books and posters and another batch of things for me to sign. Many had driven for hours to meet me here. Some had come from islands on boats, and they wanted pictures and had special notes for me. Some even brought gifts and homemade platters of food to eat. I’d been running for nearly 35 hours straight, and a long line had formed to get my signature. My journey to Greece and the uncovering of my roots had been a transformative revelation, and the Spartathlon experience was the crowning jewel. Yet the race hadn’t been easy. Although I was grateful for having finished, I was disappointed with my performance. But such were the tides through which I moved. There would be “no solitude nor weeping.” Not now, not ever. Sto kalo, to the good. I would stand here until sunset signing things, smiling for photos, talking with others while holding my head high. These people had traveled far to see me. And now I realized, with great clarity, that I had traveled my entire lifetime to see them.

Adapted and excerpted from The Road to Sparta, available wherever books are sold, with the permission of Rodale. 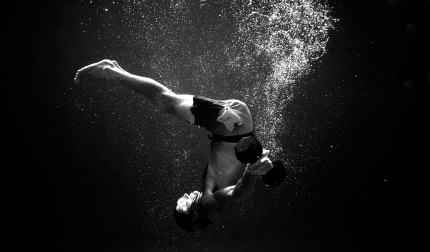 What Doesn't Kill Us Scott Carney went in search of athletes pushing themselves to the limits of human endurance for his new book—and then he found surf legend Laird Hamilton. 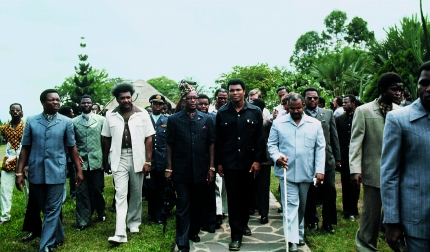 One Step at a Time In 1972, Frank Shorter’s Olympic marathon victory inspired millions to take up long distance running as a major American pastime. In his new book, he reveals the pain behind the glory.